After more than two years of avoiding conferences and airplanes, I attended my first packed event last week. Singer Lyle Lovett was coming to Geneva; how could I resist? My husband and I masked and sanitized. We stuck together, leaning so far into each other we might have gotten away with one seat. We even left early but enjoyed what we’d already heard so much, we didn’t mind.

My only regret was missing one of my favorite Lyle songs. “God Will,” it’s called, but it’s not exactly a Christian composition. Instead, it’s a quirky country ballad in which the singer addresses a love who has done him wrong:

“Who keeps on loving you when you’ve been lying, saying things ain’t what they seem?” Lyle Lovett croons with heartbreaking tenderness but the song’s real punch comes from the refrain:

God does, but I don’t
God will, but I won’t
And that’s the difference between God and me

The song is fun because the singer’s tone contrasts so greatly with the bitter message he delivers. But I wonder if it also resonates because we recognize something of ourselves in the refrain. Whose job is it to forgive hard things? Lovett’s song asks while simultaneously serving up the answer: Not mine!

Many of us do our best to be and do good but we get stuck a thousand different ways. Still, we strive to be better to our spouses, friends, families and even to ourselves. We persevere with co-workers or people who cut in line at Wegmans. But we have our limits and when it comes to those who deeply hurt, disgust or frighten us—forgiveness or even acceptance seems like too much to ask.  It’s as if we’re willing to do our bit but leave the heavy lifting for God.

God can certainly handle the heavy lifting. But the work of God, which is the work of Love is our job, too. In today’s Gospel reading, Jesus indicates that following him might (or will) lead to certain amounts of upheaval. Do you think that I have come to establish peace on the earth? No, I tell you, but rather division.

This is not exactly comforting. Where’s the reassuring Jesus who told us just last week: Do not be afraid, little flock, and spoke of treasure in Heaven? It’s the same Jesus, of course. And we know the story well enough to understand that following him is no small thing. It involves rejecting social, economic and political boundaries and finding our brother in the face of the outsider.

It means speaking the truth when it’s most needed and, therefore, most difficult and most unwelcome. It requires making time for prayer and letting go of excessive attachment to ego, status and material goods. None of this is supported by the larger culture. In fact, living in the world as Jesus did often upsets the status quo and may even cost the support or understanding of family and friends. But thankfully, Jesus shows us how to stay the course. Look at him up there on the cross. When did he ever say love was easy? Instead, he shows it again and again as the answer to every question ever asked.

I don’t know how many rules of scriptural etiquette I’m about to break by invoking another country song after quoting Luke but I’m thinking of the 1970s hit “Rose Garden” in which Lynn Anderson sings, I beg your pardon, I never promised you a rose garden. Look buddy, the singer says. Love is not a cakewalk. It’s honest-to-goodness work, but that’s where joy is. So are we going to do this thing or not?

Following Christ means loving others in cases where others (friends, family, colleagues) would understand (and even prefer) if we did not. It means adapting Lyle Lovett’s lyrics from God will, but I won’t, to, God will, so I’m going to try. It means making the deliberate decision to stick with our gardens, no matter how thorny, and spending part of each day bent into the soil and wiping sweat from our brow. All those brambles and hours of thankless labor! No wonder it’s so tempting to leave it to God.

The good news is that when we keep with it—when we get out there with our shovels and pruning shears and wide-brimmed hats and tend that which has been entrusted to us—we will never have seen such roses as those that will spring from the earth. 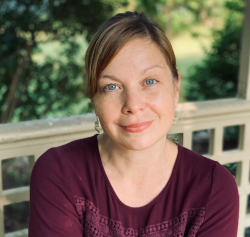 Sonja Livingston
Sonja Livingston is the author of four books, including her latest, The Virgin of Prince Street: Expeditions into Devotion, and the award-winning memoir of child poverty, Ghostbread. A regular contributor to America and Sojourners, Sonja is an associate professor of English at Virginia Commonwealth University and recently completed a two-year program of spiritual formation through the Center for Action and Contemplation’s Living School. She is married to the artist Jim Mott and divides her time between Richmond and Rochester where she worships at St. Frances Xavier Cabrini Parish.